The hook is as old as fishing itself.  There has been very little technological improvements outside of the metal technology.

This particular post we at Angler’s Gear are going to concentrate on is one of the newest of the hook technology – the Kahle hook.

The Kahle hook is not a circle hook nor a J-hook (j-hook being the standard hook with a long shank).  Instead it is somewhat in between the two.  The Kahle hook has a point that turns back towards the eye and an exceptionally large gap.  The wire is thinner than the circle hook variety – leading to less damage to live bait.

Because of the limited damage on live bait, Kahle hooks are ideal for a strong hook up.  However, it comes at a deep cost – the hook can often gut hook the fish.

It is important to remember that the goal of Angler’s Gear continues to be catch and release fishing.  If you are planning on catching enough for a meal and are not limited to sizes, Kahle hooks are ideal.  For any sort of fish limits, catch and release only waters or if you are not catching to dine, please elect a hook besides a Kahle hook for your needs.  Angler’s Gear is listing this specific hook for information.

What is a Kahle hook?

The Kahle hook is halfway between a circle and a J-hook. It was designed by the well-known Eagle Claw firm, which also created the popular Shiner Hook. It is a strong hook with an offset point.

Kahle hooks are made in the United States. Kahles can be purchased with or without a needlepoint (sharp tip). They come in sizes #12 – 20/0. The most popular size is probably the #14, which would work very well for crappies and bluegill sunfish using

They also come in both fine and heavy wire configurations, which affects how quickly they sink. The finer wires go into the fish easier but don’t hold up as well while fishing.

In our Kahle hook review, we go into more detail about why it is a good hook to choose as well as how and when you should use them. We also offer some suggestions on where they can be purchased at the best prices online so that you have everything you need for your fishing trip!

When should you use Kahle hooks?

Kahle hooks are great when you are looking to be actively fishing.  This means holding the rod in your hand and allowing live bait to work.  The hook is designed to allow the fish to take the bait completely, up to and including swallowing the bait.

There are some who argue that a Kahle’s hook is ideal for light bites, often for game fish that will inhale a bait rather than attack it.  However, Angler’s Gear is of the opinion there is no way of knowing if a bite will be hard or light.

What are the best species for Kahle hooks?

The Kahle hook has great versatility.  The wide mouth works well with live bait, such as shiners or pinfish, and cut bait.  The variety of baits available means the hooks are appropriate for freshwater and saltwater.

The huge variety of sizes and colors of the Kahle hook mean almost any freshwater and most inshore saltwater species are perfect targets: largemouth and smallmouth bass, northern pike, muskies, catfish, and the like in the freshwater.  In the saltwater: redfish, trout, snook, redfish, drum, sheepshead, and the like.

Basically, if the species will hit live or cut bait, you can use a Kahle hook.

Angler’s Gear is going to provide you with a much more detailed review of circle hooks.  The circle hook found a strong following among the catch and release fishing world because there is much less chance of hurting a fish since the hook will naturally gravitate towards the corner of the mouth.  This means for some species which cannot be taken legally for any reason.  The circle hook gives a fish a better opportunity to survive after landing.

The circle hook differs from Kahle’s hook in the hook point and barb.  The point of the tip lies directly perpendicular to the shaft.  Many who are not familiar with the circle hook will believe the hook will not lead to regular hookups, but this is not the case.  Many times circle hooks are used exclusively by researchers, who catch species for data only to release them back into the water with as little damage as possible.

The way the tip of the barb turns allows for the fish to swallow bait fish completely.  The hook, however, will not stick in the stomach.  The hook will rise out of the stomach, into the mouth, and turn at the side.  Once there, the fish will hook itself.

A Kahle hook allows one of two choices for the angler.  Since it is live bait, the angler can actively set the hook or allow the fish to swim away, allowing the hook to set itself in the fish.

Again, there is a strong chance of the species swallowing the hook completely and causing serious damage to the fish. 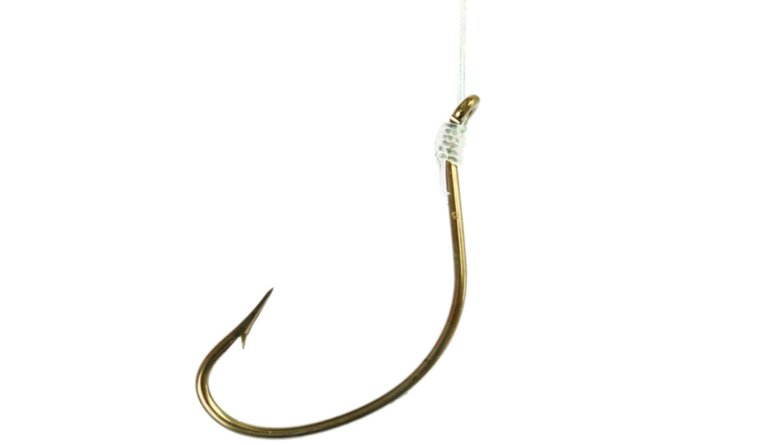 Eagle Claw is the originator of the Kahle hook.  There are several different sizes and are highly versatile as a consequence.  The hooks are laser sharpened and will provide solid hookups.

Eagle Claw is the only hook made in the U.S. and has been for the last 90+ years with no signs of slowing down or stopping. 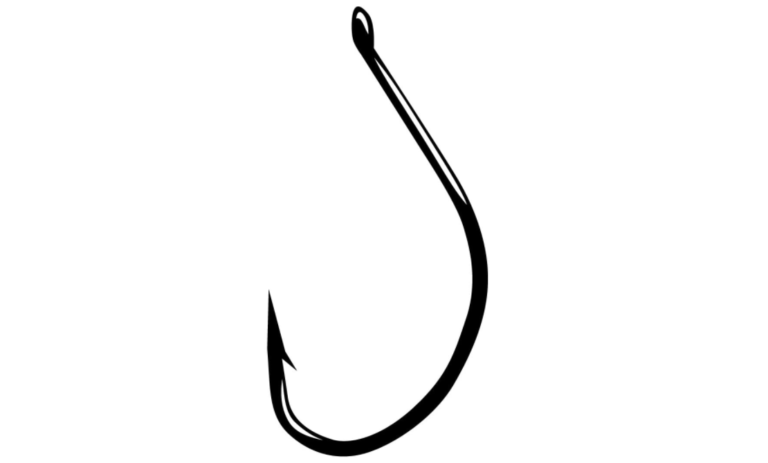 The Gamakatsu brand is a Japanese manufacturer known for its incredibly sharp points.  The hooks are some of the highest quality available and come in a variety of sizes.

Gamakatsu hooks are not cheap by any means, but the sharpness of the barb and exceptionally stoutness of the hook will make up for the price. 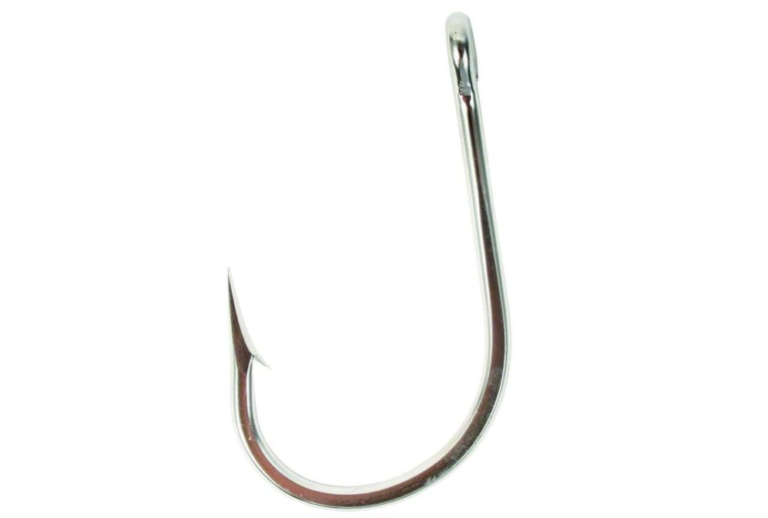 Mustad hook points are much more stout than some of its competition, making them great for saltwater species like sharks and even some large pelagic fish.  The point is honed into a conical point and easily resharpened to factory ready with a bit of effort.

Mustad is like many other manufacturers in that the brand has its adherents.  Much like some will only use Shimano, Daiwa, or Abu Garcia, there are those who will only use Mustad. 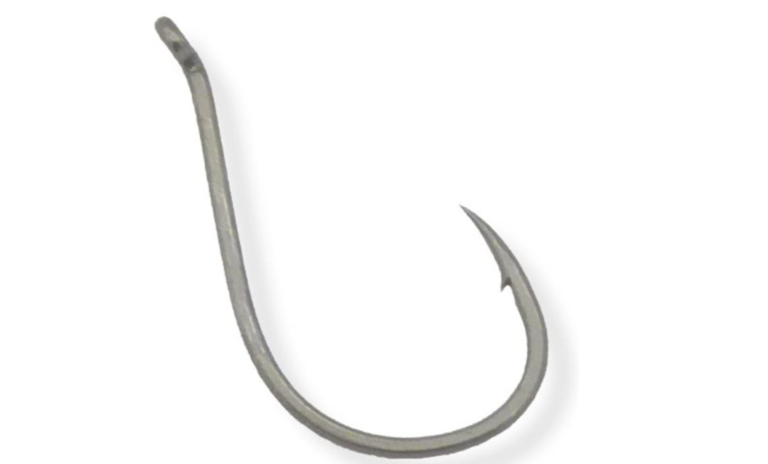 The Owner Kahle hook is one of the few designed specifically for the saltwater angler.  Many hook everything from shrimp to crabs for inshore quarry.

As we are always looking for the best products available for you and your angling needs, we do not think Kahle-style hooks are a good choice for overall use.  There are better options available for you, particularly for the catch and release fishing lifestyle we love and support so much.

Angler’s Gear wants you to continue enjoying your fishing activities and hobbies, but we always want you to only keep what you plan to consume.  Return the rest back for another day.

Until we meet on the water – practice good Catch And Release habits (Read our 10 best Barbless Hooks for Fishing review)!

What size Kahle hook for catfish?