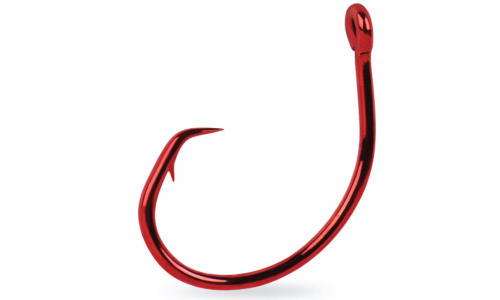 The line started its slow rise from the loose slack sitting under the water and running back into the tip of the rod down to the reel.  The angler had expected this and sat patiently, waiting.  As the line began to grow taut, the angler began reeling up the slack.  Again, the angler waited.

Lifting the rod tip up, the beast on the other end recognized something pulling it in the opposite direction.  Deciding this was not a direction it wanted to go, the beast sped away.

A few minutes to hours later, the angler brought the beast up close.  Snapping a few pictures, the hook was quickly and easily removed from the corner of the beast’s mouth.  A few seconds later, it swam away, back into the depths for the next angler to fool it.

This scenario was made possible by two reasons:

What is a circle hook?

The circle hook is somewhat of a misnomer because the hook is not a circle as expected.  Instead, it is a when the point and barb of a hook turn back and are perpendicular to the shank while parallel to the bend.

Angler’s Gear recommends inline circle hooks.  The offset hook will not always work its way back to the corner of the mouth on the fish, defeating the purpose of the circle hook.

What is the difference between a circle hook and standard hook?

This is in sharp contrast to the standard J-hook that many anglers fish with on a regular basis.  The J-hook, with the point and barb running parallel to the shank, means the hooks are easily swallowed, can injure or kill a fish as a consequence.  This is possible even with a barbless hook, although the removal of a barbless hook is much easier on the fish.

Advantages of a circle hook

These are specially designed hooks because of the way the hook catches hold to the fish for fighting and landing.  The circle hook is specifically designed to work its way back from the gullet to the corner of the mouth, where the point and barb pierce and rest on the corner of the mouth of the fish.  There are distinct advantages to this outside of catch and release.  Toothy fish, common in colder waters and in saltwater, can cut through fishing lines without a wire leader.  The circle hook pulls the line out of the fish’s mouth, protecting the line during the fight, landing and release.

Like Angler’s Gear points out above, the advantage of the circle hook is preservation of the fish.  The Mid-Atlantic states up to the Northeast have new regulations on Striped Bass fishing, a topic we cover in another blog.

The gap between the hook point and shank is significantly reduced from the J-hook gap.  This means there is much less a chance of the hook landing in the gullet.

If this is not enough for anglers to consider circle hooks, here is one more consideration.

Rather than losing precious tackle in gullets by snipping line and allowing the hook to rust, anglers can save their gear – or money in this instance.

The biggest difference in using a circle hook vs. a standard J-hook is the way you set the hook on the fish.  Most anglers will reel down to the surface of the water and pull back on the rod with a big, sweeping motion.  This drives the point into the fish.

A circle hook does the work on the angler’s behalf.  The angler takes up the slack and lets natural drag pull the hook back to the corner of the mouth on the fish.

Anglers who fish on the shore or bank know the fish will hook themselves on a circle hook.  Thus, anglers can leave rods unattended while sun bathing, enjoying a beverage, attending to young anglers or looking for fresh bait.

It should go without saying, but the circle hook is ideal for new anglers.  The lack of extra work necessary for a hook set is ideal.

The biggest issue with a circle hook is the necessary retraining of the normal reactions of an angler to sweep the rod up and back for a hook set.  Allowing the fish to hook itself with the slow steady pressure is something many do not do normally.  Trying to set a circle hook in the standard fashion usually results in pulling the hook out of the mouth of the fish.

The second common issue is bait.  Circle hooks are designed specifically for bait fishing in mind, and many anglers will overfill the hook with bait.  Doing so makes the hook set very difficult if not impossible.  Match the hook to the size of the bait.

What circle hooks are the best

Hooks, like much fishing equipment, have their adherents.  However, Angler’s Gear is committed to finding and recommending the best options available.

The Facikono Circle Hook pack is one of the best options on the market for a few reasons.  The main reason is the sheer number of hooks available in a variety of sizes.  This makes matching the hook to the bait exceptionally simple.  The plastic carry box is just an added advantage.

The set comes with hooks ranging from 1/0 to 6/0.  The hooks are good for freshwater and saltwater sas well.

If there is a drawback to this set, it is the fact the hooks are offset.  Using a pair of pliers or a vise, the angler can easily squeeze the bend in the hook.  This will drastically reduce the size of the offset if not eliminate it completely.

Our second choice is the Mustad UltraPoint Demon Wide Gap.  This model is an inline hook, and the wider gap is ideal for larger fish.  So long as the angler uses the same techniques of fishing a circle hook as mentioned previously, the chances of a gut hook are slim.

The Demon Wide Gap comes in sizes from panfish to Marlin.  There are three color options, and Angler’s Gear is a big fan of the red model.

The Demon Wide Gap is thinner than some models, making the hook sets much more accurate.  The technology also gives a 20 percent stronger metal as well.

These two sets are really all you will need for circle hooks.  Both sets come with a variety of sizes, so there is no need to invest in other makes and models.

One thing Angler’s Gear would ask is you bend back the barb to make the circle hook barbless.  The chances of hooking in the side of the mouth are high with a circle hook, but the barbless point will make returning the quarry to the water much easier.  Again, we are always looking at the next generation of angler and their opportunity. You can read our full review of Barbless Hooks for Fishing

We hope to see you on the water!  Until then, practice good catch and release habits. 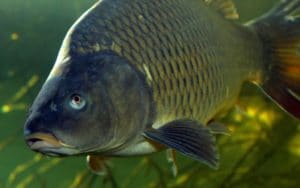 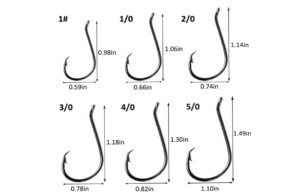 Getting your circle hook size right is so important! If you choose the wrong circle hook, it may not work for what you’re fishing for. Circle hooks are great because they don’t gut hook fish like most other types of hooks do. This will prevent damage to the meat and skin of your catch, which can affect how long your catch will last. There are many circle hook size charts online that can help you choose the right circle hook for your needs, but there often not comprehensive enough. here’s a quick reference guide to get you started. 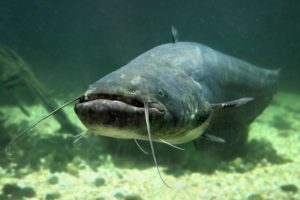 Whether you are a first-time or seasoned catfish angler, the best hooks for catching catfish will be different depending on what species of fish you are trying to catch. Before heading out on your next fishing trip it would benefit any angler to know about the different types of catfish and which ones they should use their favorite hook for.